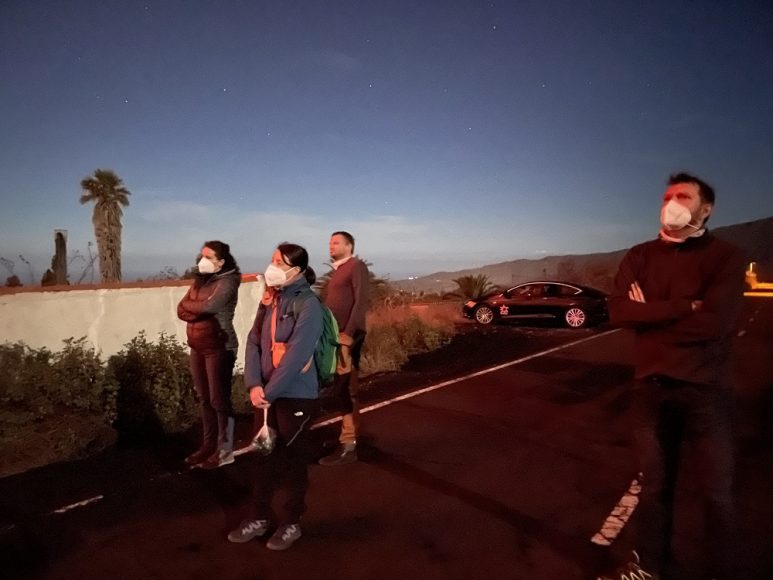 Huge ash clouds, a constant column of smoke over Cumbre Vieja and permanent uncertainty as to how the volcano will behave next: this has long become normality for the inhabitants of La Palma. Periodically, the airport is closed and residents are told to stay in their homes and wear masks outside – for fear of the health consequences. But what is the actual state of air quality? How vulnerable are people to the toxic – but invisible – substances in the air?

In order to gain precise insights, Palas GmbH from Karlsruhe is now supporting the Spanish authorities on the Canary Island of La Palma in monitoring air quality at various measuring points. For this purpose, these experts in aerosol technology provided nine of its most up-to-date devices on La Palma at short notice and without complications. In order to be prepared in the best possible way for the uncertain conditions, these were analysed in advance and final, individual adjustments were made to the technology. What is particularly special about all this is that the measurement data is updated every minute and can be accessed and visualised from anywhere on the new MyAtmosphere  data platform.

MyAtmosphere was developed by Palas and is – in short – the most advanced environmental measurement system for smart cities and large areas. The data platform allows the Palas measuring devices to be connected to form a measuring network and the collected data is available at a glance. Regardless of the area in which the air quality is to be measured and monitored, via the data platform users see current and precise measurement results that are processed and visualised in real time. This allows the necessary measures to be derived simply, quickly and effortlessly. And that is exactly what the authorities on La Palma need.

The project team was on-site for four days

On 15th November, four Palas employees, including CEO Dr Maximilian Weiß, set off for La Palma. The managing director explains how the contact with the authorities on La Palma came about, “We are known throughout Europe for our fine dust measuring instruments – both in public measuring networks and in scientific applications. And that’s how we ended up being asked through a contact – from Iceland to Barcelona to La Palma – if we could also install measuring devices on La Palma to monitor air quality there.”

Palas has already installed equipment all over the world – including previous set-ups on the Canary Island ­– but the deployment near an active volcano is extraordinary even for the CEO. “We take measurements with our devices in a range of different places with many different conditions, such as on the Zugspitze or Jungfraujoch mountains, in deserts, in the Himalayas and at construction sites or in industrial areas with extreme dust pollution. But we didn’t know how extreme the conditions on site on La Palma would actually be, how dangerous it would be, or what exactly awaited us there. This wasn’t the kind of thing we’d ever experienced before.”

On arriving on La Palma, the island first makes a very peaceful impression. The airport is on the safe, eastern side of the island, where neither the volcano or the ash cloud is to be seen. Everything seems normal. The rental car was picked up and it was off to the equipment, which had been sent to the island in advance and first had to be unpacked and checked. Then it was off to the first measuring station. Where the devices were to be placed was discussed in advance in an online conference. In two days, Palas employees travelled to nine stations, climbed onto house roofs and garages, installed a device in a school and one in a mobile measuring bus very close to the volcano. They were supported by local staff, who – like all the residents they spoke to on-site – were very grateful for the project and the data obtained.

The first clear view of the volcano was sobering. Nothing but black smoke on a high mountain. “We imagined it might be a bit more spectacular,” explains Ann-Kathrin Goßmann, project manager at Palas. But in the evening the volcano changes its face: spewing red lava can be seen and the whole mountain is surrounded by a red glow, with the sounds made by the volcano being reminiscent of ocean surf. The danger to health suddenly becomes real and it is easy imagine the air here being full of something or the other. On the second night, the Palas staff were awakened by an earthquake.

The people on the ground – normality

What was new and exciting for Maximilian Weiß and his staff has long been normal for the local people. Regularly and several times a week, streets and sidewalks have to be cleared of the falling ash. People wear their masks more or less consistently. Whether because of Corona or because of the ash in the air, there’s no way to know for sure. At the school, too, everything is back on track – although the children have a direct view of the active volcano when they look out of the window and ash is constantly being swept from the school roof.

The Palas team needed less than 48 hours to connect the nine devices, although they had to drive around the entire island to set up an air quality measuring network. On average, installation at the respective installation site, including commissioning in the cloud, took less than 2 hours. The measurement data is transferred to the MyAtmosphere data platform, where a comprehensive situation picture is then displayed. The authorities on the ground are thus in a better position to assess the situation and react accordingly. There are many factors that influence air quality, such as wind direction. Therefore, the new monitoring network needs to cover the entire island and not just the immediate vicinity of Cumbre Vieja.

“The installation went smoothly – plug & measure, so to speak: connect, switch on and with just a few clicks the devices were visible in the network of the My Atmosphere data platform,” explains Ann-Kathrin Goßmann. “The biggest problem on-site was getting onto the roofs where the equipment was to be placed and a brief shortage of extension leads.”

What do the authorities now hope to gain from the measurement data? Maximilian Weiß says, “It’s not about evacuating all the residents. The point is that we, or the local authorities, can use the measurements to better assess those places the air pollution is so high that it is no longer permissible to be there. The island is very complex in terms of the topography: there are certainly places where the air quality is very good, but in the western part of the island there is also the extreme pollution from the volcano and there is a real risk that the exclusion zone will have to be extended.”

After three days, the four employees were due to return home, but air traffic had once again come to a standstill. There was too much ash on the runway because the wind had shifted during the night. This meant a ferry trip to Tenerife and from there on the plane home.

Palas now monitors the entire situation from Karlsruhe and is still in contact with the authorities to advise them further on the measurement data.

But how is the air quality on the island? Dr. White reports, “In fact, the readings are not as bad as they were at the beginning of the outbreak. However, there are always peaks where exposure exceeds the recommended limit. In such cases, it is necessary to react swiftly, as the authorities are already doing with temporary curfews. It’s a matter of continuing to monitor that and hoping the volcano stops its activity soon.” 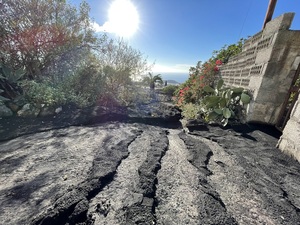 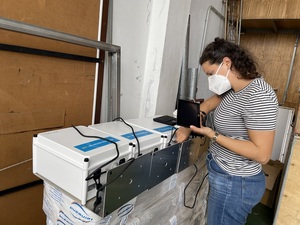 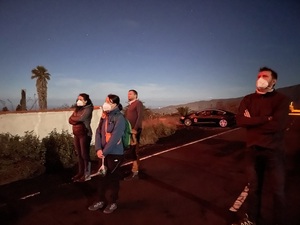 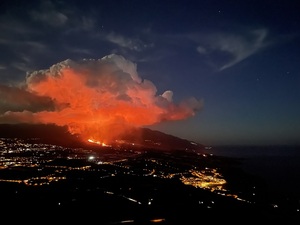 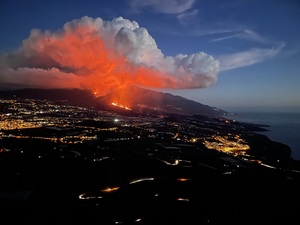 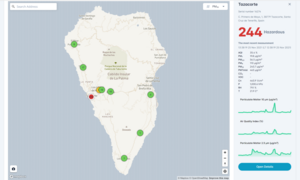 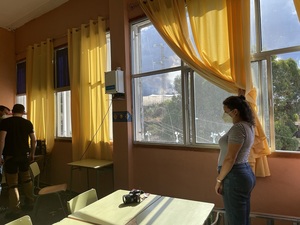 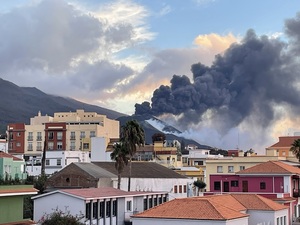 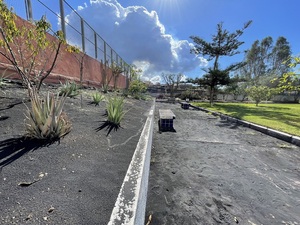 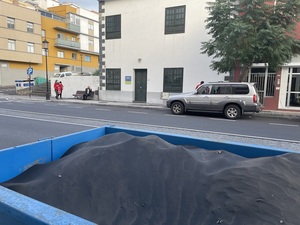 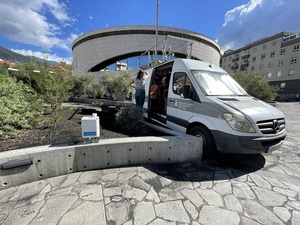 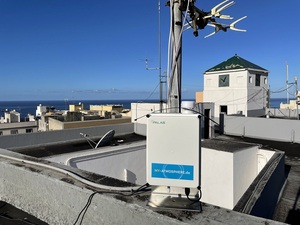 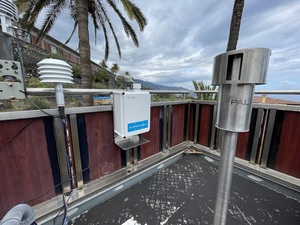 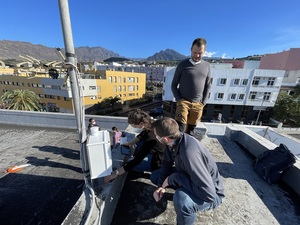 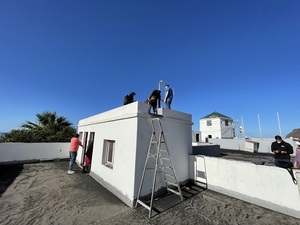 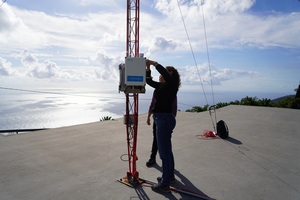 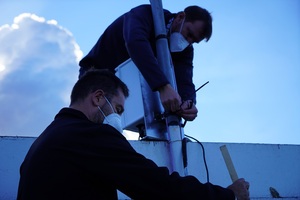 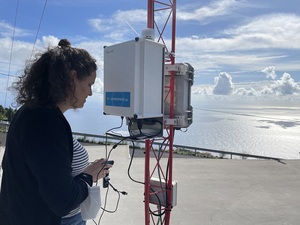 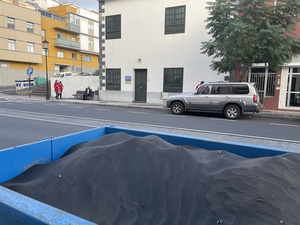 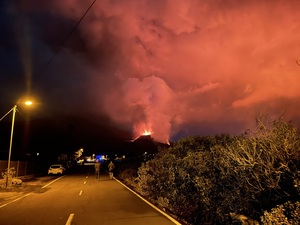 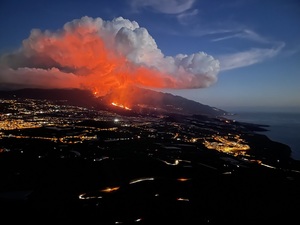 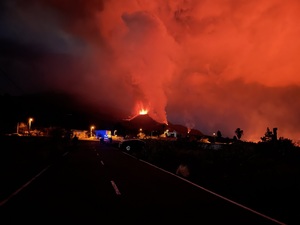 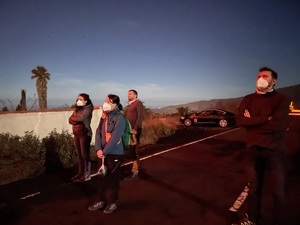 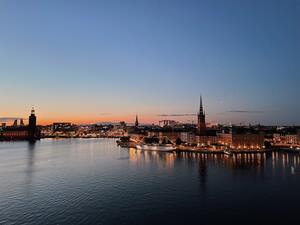 At the beginning of 2022, the Stockholm Port Authority decided to investigate emissions from cruise ships docked at Stadsgården. The ships are not connected to 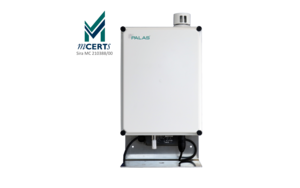 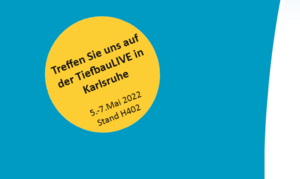 Meet us at the TiefbauLIVE